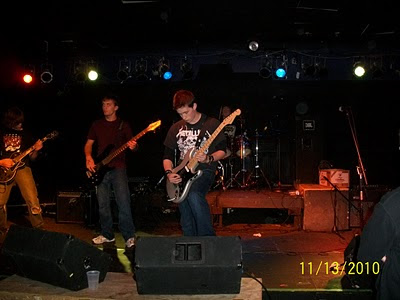 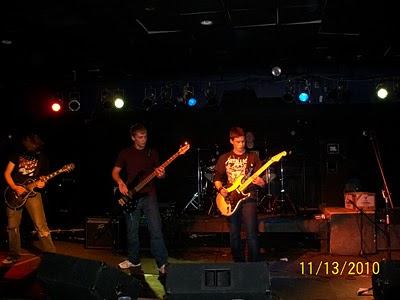 The band was obviously way better live than the sound you will hear here. This was just a low budget video recorder.
My kid, David Harley Brachmann plays in the band. He is the guitarist with the silver Fender Stratocaster and the Metallica T-shirt. The post title portion that says 2 Minutes and 38 seconds does not refere to the length of anything, it is where you need to get to in their Sun Flight Live video if to hear nothing more than him wail out one sick F'ing solo. It may be short, but it sure is SWEET. "I'm not biased at all." The kid rocks. The band rocks. They also have plenty of other tracks and vids on YouTube. Check em out. They are Wicked Inquisition. One of my favorites is their namesake song they wrote called Wicked Inquisition. You gotta check this one out. They also have a cool Vid called White Stallions. Live. In it, the drummer does a wicked solo. The band members are young and have a ways to go, but I have a feeling they will go nowhere but up. They are truly a bunch of talented dudes. I wish them all the the best of luck in the world.
Hopefully they can make something out of this band.
Keep rockin guys.
One of your biggest fans.
Yeah, You know who.
Check out their links to hear them play on YouTube.
Posted by Mr. Motorcycle at 2:36 PM

Oh they will be playing Madison Square Gardens in no time.

what, no link. I'm always game for new talent. I'll go check them out for sure.

The links to all the songs mentioned in the post are in the post words, not the pictures.

Thanks for supporting the talent.

Ahhh, ok gotcha.
Damn man, he was shredding real good. I had to watch the solo part several times.