For those of you who don't watch the television show Son's of Anarchy, here is an explanation of the word SAMCRO. It is an acronym for Sons of Anarchy Motorcycle Club Redwood Original. This is what they refer to their Motorcycle Club as.


I'm just starting to read the second book in a series of "Prey" novels by John Sandford. The series is fantastic, and has gotten great praise from critics, and readers alike. 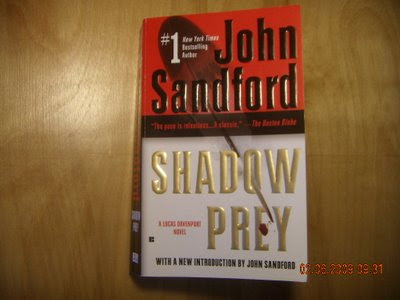 The second book is Shadow Prey. I'm just getting started. Then I read this here, and was struck with the question if the writers from the new hit television show Son's of Anarchy ever read the novels, and if they put a play on words, or if this is merely a coincidence.


I've blown this page up into bigger pictures below, so don't try to strain your eyes to read this one. 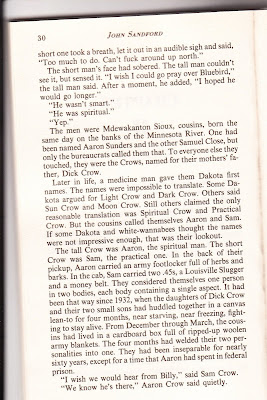 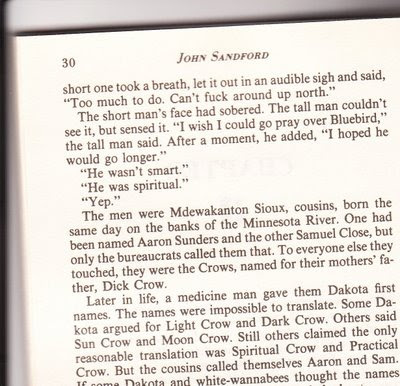 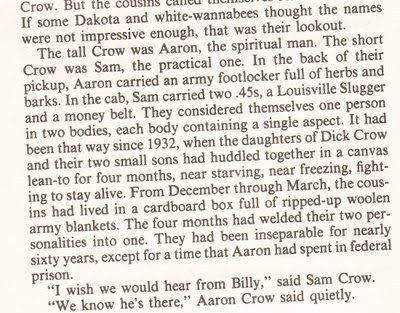 Things that make you go Hmmm?
Posted by Mr. Motorcycle at 9:40 AM

How about ummmmmm hmmmmmmm?

So -
Is it as good as the 1st book? And, can I count on it giving me a buffer the the number of books I have on the nightstand?

The original name of the show was called, "Forever Sam Crow"...

There's an awful lot of humming going on around here.
Mr. M, you'll have to give us your take on it after you read this next book. Might it be, that you've stumbled on to something that might keep other SOA fans happy during the show's off season? Hmmmmmm.

Having never seen SOA (yet), I’ve got no idea what you’re talking about. But I’ll keep coming back for the hummmmmmmmmmmming!

Does the SOA theme song sound good humming it?

"SAMCROW" is also an acronym for the "Saints of the Apocalypse Motorcycle Club Reaper Originals Worldwide"
www.SAMCROWS.com
The "S" in the url address stands for "Society". They actually call their center patch Mr. Sam Crow. they dont seem to be an outlaw group either.. seem like a bunch of guys with Irish roots, i.e. the Kelly green, that ride together or know each other very well. Who knows where they got the idea.. the show... coincidence... a book they read.. a movie. Hell who knows and who cares, but they exist. Influence is everywhere!

I looked at that website, and it appears as though the name SAMCRO for the MC is a registered trademarked name. I wonder if SOA got permission to use the name in relation to a MC.

Or could it be in homage to Lee Marvin's gun runner character in "The Comancheros" Sam Crow?

I understand what SAMCRO stands for and its on the wall of their biker club and on their cuts, but if you notice on the front page of the book that John Teller wrote it says SAM CROW