It's been a white wintery not so wunderland here in Minnesota this year, and I know many other places as well.

Being an insurance adjuster, I think I've handled more interior water damage claims caused by ice dams due to the repeated large snow falls this year than any other year before. Correction, I know I have.

Mrs. M. refers to this year as "Snowmageddon".

So for me and all of the other snow bound riders out there who won't be riding any time soon, I am posting this to lighten our spirits.

Below is an aerial photo of the average upstate NY & New England commute for folks these days.... 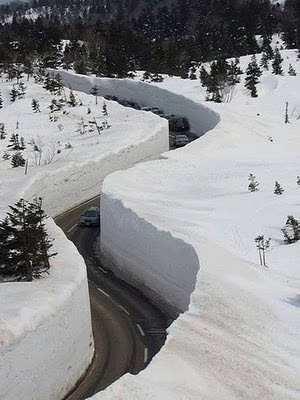 O.K. after seeing this, I'm convinced it is not so bad here and I am officially done bitchin about the Minnesota snow....(Maybe).
NOW THAT'S A LOT OF SNOW!
Posted by Mr. Motorcycle at 9:08 PM

I'll take our winter over that winter any day of the week! CRAP! That's some snow!

Oh my gawd, that's one shitload of white stuff!
And to think I bitch about our daytime temps plummeting to 18C during our winters in Limpopo!

Holy Cow! I'd like to see the snow plow that made that path!

Your gonna make me feel guilty posting pictures of me riding in the bright sunshine! Stay warm and dry!

That's a great photo, except the cars are driving on the left, and I don't know of any country that does that that also gets any accumulation of snow. Photoshop is suspected. :)

That is a lot of white stuff. As for left side...could have been posted backwards.

That is some snowplow that that cut such straight lines AND make the snow it has plowed disaapear! A good picture though.

Good point there Canajun. It does look a little too perfect and those plow blades would have to be pretty damn huge. I'm suspecting a little photo shop magic too now that I look at it closer. No matter what, a little snow is too much snow!!!

Photoshop or not...I'm cold just looking at it.