In today's news...
Dora the Explorer's cousin Diego takes up a life of crime; and witnesses report that he had a sidekick named Swiper with him.
Diego was caught in the act and photographed by some locals.
America's dumbest Criminals has footage of Diego trying to burglarize a home in Denver, Colorado. While attempting to gain access into the home or flee the residence, he got stuck between the opening  of a window air conditioner and the window frame.
Local Denver Police responded to the 911 call made by a neighbor and now have Diego in custody for questioning. Charges for the attempted theft are being pressed. The police released a statement that no one was hurt, and nothing was stolen, and because nothing was near the window and the home owners reported nothing stolen, they believe Diego got stuck trying to enter the home.
Local witnesses report Swiper the Fox likely had involvement in the attempted burglary. This was confirmed by the responding officer who reports that he saw Swiper the Fox fleeing the scene upon their arrival.
A warrant for Swiper the Fox has been isssued, and it is believed that he may be armed and dangerous! 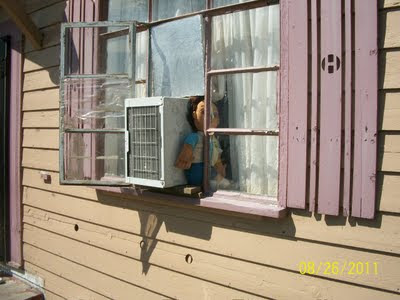 Rumor here on the streets of Vegas is that the two of them have been running with a pretty rough croud recently. http://www.davesdailydose.com/tag/bert/

Redneck at its finest.
Love it!