My absence can be explained yet again by storm duty. I've just recently returned from a tour of storm duty, handling tornado and hail claims from Colorado. Within about one months period of time there have been over 9 significant storms. Several of which had tornados and all that produced hail. It seems ironic to be sitting in your vehicle writing up a hail damage estimate for someone's home or auto while it is hailing at that very moment. It's happened to me once. I've also been on an auto "drive in" assignment once where as we were driving to the drive in location it hailed on the vehicle we were driving three different times.
This time handling hail claims in Colorado there was a tornado one night within a neighboring city to where I was staying at. It too produced lots of damaging winds and hail. This is crazy shit. I'm glad to be home. I only hope I can stay here. Hopefully they won't need me again for awhile. Maybe I can actually get caught up on some of your blogs.
Anyway, I didn't have much time to really get out and see the sights so much, which really bums me out, because it is such a beautiful place. While on storm duty you work a minimum 12 hour day. This leaves no time for anything else but to eat, sleep and shit. Sometimes you feel like all you do is eat, sleep and shit hail. The Rockies are truly breathtaking. At times while driving along from one home to the next, I'd get beautiful glimpses, but no place to really take the photos that would do the Rockies justice, because, well, work got in the way and so did the other moving cars flying by on the freeways.
I got one shitty picture while driving. That's it. Oh, and my camera's zoom sucks, especially while driving down the freeway. 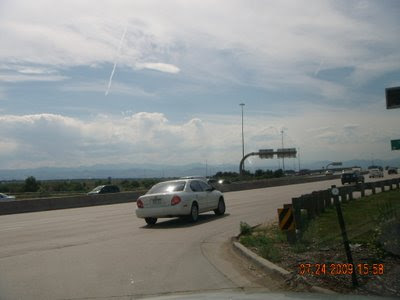 I did get an interesting set of photos that I thought I'd share.
Nice trailer huh?. See anything interesting?
(I altered the picture so you don't really see.) 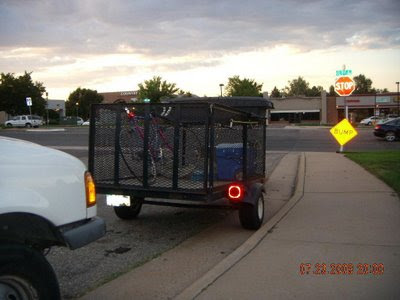 Yup, That is a mighty big trailer for a motorcycle. 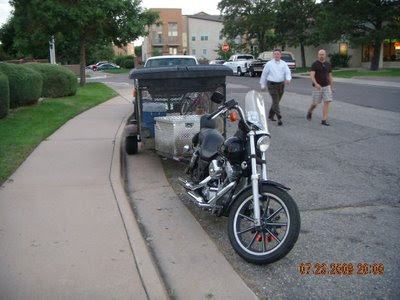 Another angle to show you that the bike is truly pulling that thing. 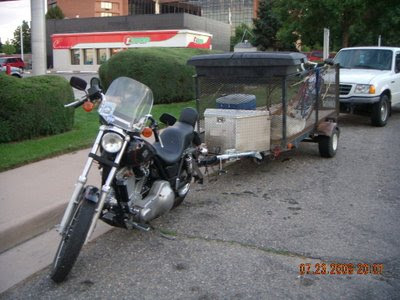 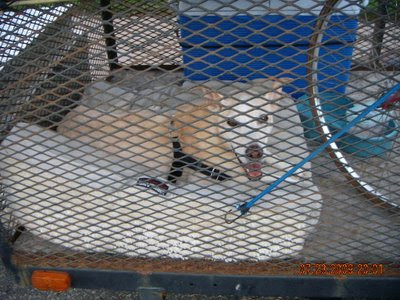 Ain't he cute?
P.S.
Scroll back two pictures and look at the guys checking this out.
Posted by Mr. Motorcycle at 10:29 PM

I was beginning to wonder about ya! I figured work was keeping you busy.

I thought the doggie in the trailer was pretty cool. I noticed he had a sheep skin pad to lay on to help him stay cool, and we know how nice it probably felt while it's moving. Pretty big load for the bike though.

Was this a claim for something?

Welcome back... and hope you can stay put for awhile. :)

That does appear to be a whole lot of trailer for that bike, but even more so for that dog. I wonder what he carries in that tool box out on the tongue?

Wow, seems like I haven't been here in forever and come over to see you apologizing for not being around! LOL! Yep, guess we've both been pretty busy lately albeit for different reasons. If nothing else, I'm sure everyone is pleased I'm way too busy to rant about Obama/politics right now!

That bike/trailer combo is definitely something you don't see everyday. Wouldn't be for me anyway. Love to know what the shearing force from that thing feels like when it wiggles on the highway. Nope, no trailers for me unless I'm behind the wheel of a truck!

The topper to the story would be if the rider weighed around 300 lbs and his misses about 250!

You just need to get on the bike and joy ride!

wow, that trailer/bike setup is wild. and im with you, im not sure how i feel about the pooch... to each their own i guess, as long as fido is comfy and with food and water.. i guess.

If yer anything like me 'n tend to severely overpack for anything 'n everything, its the perfect answer to that age ol' question "of COURSE I'm takin' the bike!....but where the hell am I actually gonna PUT all this shit?"