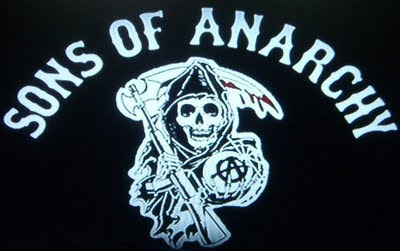 This episode shows that the program will pick up momentum, just like season one did. Kurt Sutter, is indeed a great writer. He shows great character building skills as pointed out by the lovely Mrs. M., who was an English Major.
Sheriff Wayne Unser kicks off this episode by responding to an anonymous tip and arrives at the warehouse that Gemma was Gang raped in. He takes Gemma in his car to find out that she does not want to go to the hospital. In fact, she doesn't want anyone to know what happened, because if she tells it will hurt Clay and Jax and then "they" win. In order to keep what happened to her a secret, the sheriff fakes a car crash with Gemma's Cadillac. Meanwhile Tara and Gemma strengthen their bond with each other in confidentiality, and Tara takes care of Gemma at the hospital without anyone knowing why she is really there.
Tig gets a call from Marcus Alvarez of the Mayans. He hands the phone over to Clay. Come to find out that they found one of their own shot up in the chest holding up nine fingers. Clay denies knowing anything about it. He blows a nut because he figured it had to be Jax who did this. Clay confronts Jax and Jax admits he did it to cover up Opies Carved "A", and said it seemed like the right thing to do. Spur of the moment kind of thing. Clay gets pissed, and thus the start of the up front confrontation of Clay gettin up in Jax's shit about challenging what he does for the club, how he does it, and why.
Tig and Clay meet the Gang members from the One-Niners to talk about setting up a gun trade. Neo Nazi, A.J. Weston (Played by Henry Rollins) is in his car taking pictures of them, when Sheriff Wayne Unser pulls up and shoes away the One-Niners and SAMCRO Just then, Unser breaks the news about Gemma's accident to Clay, and they all take off. Since Clay is convinced that Gemma got in an accident and has no clue she was gang raped, Clay is basically a happy dude hanging out in the hospital with his grandson Abel. A.J. pops into the hospital, and sees this. He knows now that Gemma must not have told Clay, or he would not be so happy. A.J. Weston Breaks this news to Ethan Zobelle, (Played by Adam Arkin) . They say that she must be tougher than they had estimated her to be.
A new battle begins with Loretta. (Remember her from last season?) Ex porn star, now has her own porn business. Borrowed money to SAMCRO, has Hubby in jail. Anyway, Georgie, a rival porn producer tries taking her girls, and stealing her business. Has some thugs to help him out with his dirty work(no pun). Jax and crew step up to help her with these thugs, and makes threats. Bobbi barfs all over one of Georgie's body guards. Too funny, Too Gross! Georgie and thugs don't take kindly to the biker threats, and rough up one of Loretta's girls. Now SOA is taking this seriously. They go over for a little game of baseball, if you know what I mean. Thug threat ended just like that. Loretta needs some help financially, or her business will be ruined. Apparently, the money she borrowed to SOA last season (by threat of Gemma) was more than she could have afforded to borrow. SOA also could use the financial gain of a partnership as the gun runnin Biz is slow due to heat from the Feds. So they talk about striking a deal with her. Use the warehouse that they recently built for guns to house her with a porn studio. The deal is for a 50/50 split in profit. The club has a meeting on this. Clay is somewhat opposed to the idea. He says that clubs tend to run into trouble when they get involved in too many different things. Jax says, look, This is a legitimate business that could take the head off of us for the guns with the Feds. They take a vote. Tig says "I AM a big fan of pussy." and the rest of the club agrees. Done deal.
The gun trade with the One-Niners takes place and a big shoot out begins. The Mayans are there to shoot at the One-Niners, and what appears to be deliberate on SOA as well. Bobbi Gets shot. No one from SOA is dead though. It is later revealed that Ethan Zobelle tipped off the Mayans about the gun trade.
I like to go bak and re-watch, and take notes of my recorded show before doing this re-cap, but since I didn't have time and wanted to get this out to you, forgive me if I F'd any of the information up, or forgot something. For now anyways, I can't think of anything else that I might have forgot to put in this recap of the show.
Please feel free to chime in and add to this.
Please feel to correct me in comments if I misquoted, or had a name, Etc. wrong.
I really enjoyed this episode. Can't wait until the next!
Posted by Mr. Motorcycle at 10:04 PM

Another awesome show, kind of slow but you KNOW it's going somewhere.

I'm also loving the new nanny, she's going to be solid for Gemma. And her "I'm going to ask some questions and you're going to tell me some answers" was a hoot. Nanny is not dumb. (Neta? Nina?)

Oh man, I can't WAIT to see how AJ is going to take Zoebelle's friendly discussion(s) with Alvarez.

Jocelyn,
Thank you for getting the name Luanne straight. I thought I might have had it wrong. Couln't think of it and thought I was pretty sure.

I agree though, even episode One seemed to be not a block buster. So far episodes 1 & 2 are/were a bit slow, but you know it is in the character building. Regarding starting a little slow, or not living up to the hype; we have to remember that this is like a new book in a series. The season will gain momentum as it goes along. Just like last season did. That's why Sutter is so great. He understands that you need basic building blocks and a foundation to build a sky scraper to have your cliffhangers fall from.
God I love this show!
Cheers!

Yes. Sutter was great last year at jerking me off right to the brink and then easing off. Looks like this year is more SOA blue-balls!

And Jocelyn-
I thought that the rolling camera got smashed during the "baseball game".

I hope that's the case Dean, I would hate to see another small mess up turn into something big and full of trouble later!