Johnstown, PA (GlossyNews) – Local and state police scoured the hills outside rural Johnstown, Pennsylvania, after reports of three animal rights activists going missing after attempting to protest the wearing of leather at a large motorcycle gang rally this weekend. Two others, previously reported missing, were discovered by fast food workers “duct taped inside several fast food restaurant dumpsters,” according to police officials.
“Something just went wrong,” said a still visibly shaken organizer of the protest. “Something just went horribly, horribly, wrong.”
The organizer said a group of concerned animal rights activist groups, “growing tired of throwing fake blood and shouting profanities at older women wearing leather or fur coats,” decided to protest the annual motorcycle club event “in a hope to show them our outrage at their wanton use of leather in their clothing and motor bike seats.” “In fact,” said the organizer, “motorcycle gangs are one of the biggest abusers of wearing leather, and we decided it was high time that we let them know that we disagree with them using it…ergo, they should stop.”
According to witnesses, protesters arrived at the event in a vintage 1960’s era Volkswagen van and began to pelt the gang members with balloons filled with red colored water, simulating blood, and shouting “you’re murderers” to passers by. This, evidently, is when the brouhaha began.
“They peed on me!!!” charged one activist. “They grabbed me, said I looked like I was French, started calling me ‘La Trene’, and duct taped me to a tree so they could pee on me all day!” 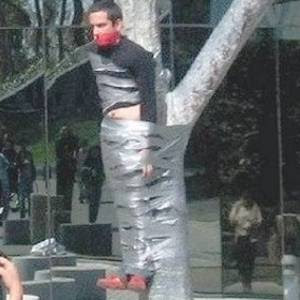 “I…I was trying to show my outrage at a man with a heavy leather jacket, and he…he didn’t even care. I called him a murderer, and all he said was, ‘You can’t prove that.’ Next thing I know he forced me to ride on the back of his motorcycle all day, and would not let me off, because his girl friend was out of town and I was almost a woman.”
Still others claimed they were forced to eat hamburgers and hot dogs under duress. Those who resisted were allegedly held down while several bikers “farted on their heads.”
Police officials declined comments on any leads or arrests due to the ongoing nature of the investigation, however, organizers for the motorcycle club rally expressed “surprise” at the allegations.
“That’s preposterous,” said one high-ranking member of the biker organizing committee. “We were having a party, and these people showed up and were very rude to us. They threw things at us, called us names, and tried to ruin the entire event. So, what did we do? We invited them to the party! What could be more friendly than that? You know, just because we are all members of motorcycle clubs does not mean we do not care about inclusiveness. Personally, I think it shows a lack of character for them to be saying such nasty things about us after we bent over backwards to make them feel welcome.”
When confronted with the allegations of force-feeding the activists meat, using them as ad hoc latrines, leaving them incapacitated in fast food restaurant dumpsters, and ‘farting on their heads,’ the organizer declined to comment in detail. “That’s just our secret handshake,” assured the organizer.
Posted by Mr. Motorcycle at 10:58 AM

Is this shit for real? Seriously? mwhahahahahaha! Ok, ok...wtf did they think was going to happen? If a group of people started pelting me with balloons full of red dye...uhmmm...Well, I don't want to get into it but in my opinion these guys got of really easy.

Dude, I'm still laughing. Reality check maybe. I'm all for standing for a cause but if you are not ready to sacrifice for it then you really are not behind it.

Have none of these activists ever stopped to watch nature for even a few minutes? Our whole existence is based on the "cycle of life". Leather...well, that is making the best use of something that would have gone to waste otherwise.

Thanks for the laugh...or endless laughs I should say because I'm still laughing. This was good. People trip me out on a daily basis...as a matter of fact, I get out of bed just so I can experience these people. Awesome!

Never have liked those peta folks. wtf did they think would happen. Had it not been a bunch of nerds it would have been worse I think. See nerds do have an advantage.

Thanks for the laugh.

You’ve convinced me. I’ve seen the error of my ways. Tomorrow I’m getting rid of all my clothes that come from critters. In fact, from now on I’m going nudist! Hell, I might even eat (gag) tofu.

HAha!! I heard about this on the radio, funny stuff. What were those guys thinking? Going to a bike rally and doing that shit.

I can't believe these jokers actually thought they would get away with such an assault... with paint balloons! They fit the definition of "clueless". Thanks for the laugh!

So how did it feel riding bitch all day....lol
It's a great piece of writing...most entertaining...LMAO

I saw this a month or so ago. still trying to figure out if it's real or not. (maybe i should just check snopes and be done with it!)

a good laugh regardless!!! Thanks for posting it :-)

This is fucking hilarious!!!!

OK, seriously, I can see being pissed off about people wearing fur, maybe. Although I would love a mink coat myself. :)

But leather actually serves a purpose. It protects us from the road. These fucking animal rights activists need to be duct taped more often IMHO. What a bunch of idiots! Talk about barking up the wrong tree! LMAO!!!!

Not only is protesting about leather dangerous the way they did, but stupid, and naive. Leather isn't why we kill cows. Beef is. Leather is a by product, and we are just being resourceful and not wasteful but using it. They should go stand at the butcher's counter if they got a "beef". Maybe the butcher's cleaver wouldn't be so forgiving though. They are lucky they didn't end up dead.

why would the PETA folks be upset at having to eat a hamburger or hotdog? Afterall, PETA stands for PEOPLE EATING TASTY ANIMAlS does it not?

Great article. I needed the laugh..

Oh man, that's just classic. One of the stickers on the hard hat I wore back in the day on big union jobs said, "I LOVE ANIMALS...THEY TASTE GREAT!!!" Red meat rules!

It would be my great pleasure to aim my stream of Bud Lite by-product all over those VW Bus driving leftist sissies. As you said, go protest at the butcher shop. We're using something that's been a useful and valued piece of protective clothing for all of and before our recorded history, and yes, it'd otherwise go to waste.

Great post...whether it's true or not!