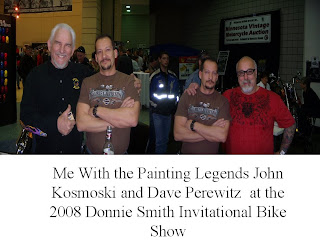 I have a Flickr flash badge of photos on the right side of my page with Pics. of some of the things I liked at the show.

I went to the 2008 Donnie Smith Invitational Bike show in St. Paul, Mn at the River Center on Sunday March 30th. The weather was beautiful. It was in the 50's which is like balmy for this time of year in Minnesota. People and bikes were all over, inside and out, and the weather was nice enough that people were ouside in t-shirts. Today I have about 6-8 inches of snow on the ground, and again ask myself, "Will I ever get to ride this year?" It was great to have such nice weather for all the bikes to come in and out of the River Center, and the warm weather brought a huge crowd to the show as well. There were bikes of all kinds there. Trikes, Harleys, Metric, old school, new school, and in general one off customs as far as the eye could see. There was a great swap meet, vendors, beer and food as always too.

The highlight of the show for me was seeing two of my painting idols. I stopped by the House of Kolor area and met with John Kosmoski, the legendary painter, and owner/creator of world famous House of Kolor Paint Products. http://www.tcpglobal.com/HokPaint/
John came to my Tech. School back in 1992 to do a custom painting demo. This was a day I'll never forget, because I was the most obsessed true custom paint enthusiast in the class, I got to be part of the hands on Demo with John. He taught me how to lay out my first set of scallops, and flames and I got to shoot his kandys on a snowmobile hood. Wow, what a memory.

I also got to meet with the legendary bike builder / custom painter, Dave Perewits breifly. https://www.perewitz.com/
Dave was in passing, so I did not want to intrude on his time too much, so I settled for a quick photo, and really quick small talk. I let him know how big of a fan of his I was. When I was a teenager, long before I could paint, I fell in love with one of his flame jobs, and have since revered him as a flame painting god.

Both John Kosmoski and Dave Perewits are class acts, and were gracious enough to be photographed with me and I was greatly honored.

Thanks John and Dave!
Posted by Mr. Motorcycle at 7:45 AM

Cool Pics! I am glad you enjoyed the show!

Dave is the nicest guy, not like those other guys from Massachusetts like Joker, Road Captain, Crusty and Rippin-Kitten. Everytime I see him at a show he doesn't mind a little small talk. I have two of his posters framed in my living room. One is the Aerosmith bike and the other is the Discovery Channel Build Off bike.