I got my bike "Kenny" back on the road. 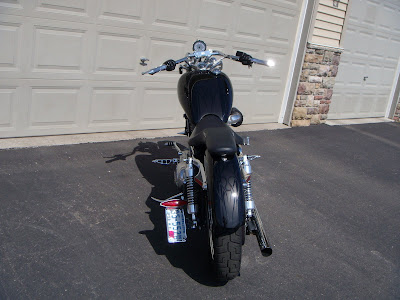 I did a Flickr flash badge called (My bike “Kenny” with his new paint job) on the right side of my blog page that shows the bike re-assembled with a new custom paint job. I even got to ride a bit on Saturday. Boy was it nice, and It felt great, since this was the first real ride I got to take since last Halloween when I broke the belt, and started the rebuild. See post from Tuesday, March 11th, 2008, The foot bone is connected to the ankle bone,.... is connected to my wallet. This explains the rebuild. I’m sure many of you can relate. http://01mrmotorcycle.blogspot.com/2008/03/foot-bone-is-connected-to-ankle-bone.html#links

For anyone wondering why I named my motorcycle “Kenny”…..
I was inspired by Beach, from Custom Motorcycle Talk by BeachCruiser. http://www.thebeachcruiser.com/blog/ . His blog post Archie 2 from April 3rd, 2008, gave me inspiration to name my motorcycle. None of my bikes had ever had names before. Both my mother and father are alive and kicking & I wanted to honor them while they are still with me, rather than doing so in remembrance of them. I can’t call my bike Ken and Shirley after both my parents. That would sound stupid. People would want to put me in a mental institution if I ran around referring to my bike that way. Since I think the bike is a masculine thing, I chose to give it a Male name rather than a female name. My mother understands. I honor both of them. Since Ken sounds a little too serious, I named the bike Kenny. I felt since the bike rebuild project was now complete, and Beach so inspired me, this was the time to name it. Thanks for all you do Mom & Dad.

The ride looks good. I have to be honest, I've never been a big fan of flames on a bike; it's just not my style. But, in this case, I do really like the look. I guess I'm too used to seeing bright red or orange-yellow flames against black. The charcoal gray blends really nice and gives it a classy custom look without being over the top. Cool.

Joker,
I appreciate the compliment.
The subtle classy looking flame job with a twist (the racing stripe) was exactly the look I was trying to acheive. This was a brainstorm I had while trying to come up with a unique twist to a flame job for my own bike, yet I wanted to keep it subtle, as black and chrome is one of my favorite looks.

Anyway, if you see it the same way I envisioned it, then I guess I pulled it off.

Thanks again for the kudos.

I use to name my bikes. My 72 superglide was Loretta. Then I met and married my wife. Her mothers name is Loretta. So I had to stop calling the bike that. Her mother would not of understood. So since then I've called them all a B type word. For starting good or bad.

That is really ironic about your mother in-laws name.

Where in the world did you come up with a name like Loretta for your bike in the first place?

Re: "So since then I've called them all a B type word. For starting good or bad."

Back in the late 70's this gal broke it off. I did not see it coming. At the time the song (You picked a fine time to leave me Lucille) seemed to fit. Well I have a lot of respect for the great B.B.King. So I used Loretta. And now they are all B#*#$. Be cause no mater how you look at it they cost a lot in money and nerve.

Webster World,
If ya are still out there, you should update your blogger profile to list your blog site so when someone clicks on your comment link, we can find you through your blog.

Thanks so much Mark. We are honored and touched. You have been one of the most active members of our community and we appreciate everything you do!