Guys, This one's for you directly from Harley Davidson.

Marisa Miller, the Victoria’s Secret Angel and Sports Illustrated cover girl, recently teamed up with Harley-Davidson to shoot photos as part of an upcoming ad campaign for the new V-Rod Muscle™. The shots will be released in the coming weeks, and feature Marisa alongside the Muscle.

In the meantime, Harley Davidson has released exclusive, behind-the scenes footage of the shoot that just went up on the Harley-Davidson YouTube channel. The video offers a glimpse into the making of the ad campaign, as well as an interview with Marisa discussing the merging of an “authentic American” girl with the “authentic American” brand. You can check it out here. Click on the image below: 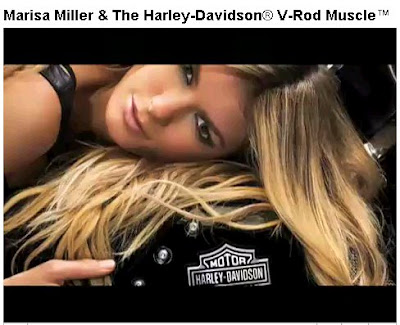 It appears after posting this one today that it was a popular post amongst some of my fellow bloggers. I wonder why?

Marisa is the coolest this year!!! good for her. this is a great looking bike that looks even better cause she's near it. the song by KAZAK in the video is great! I am going to itunes right now to download it!

The Bike is seriously HOT!!!

I read some place that said she is not a rider and HD should have gotten a women that rides. I'll wager she rides just fine.

Webster... riding what I wonder? LOL!

Dave,
Please fill me in. I know not why.

Anonymous,
What is the name of the song?

IHG,
I think she might make the worst of basket cases look alright.

Webster World,
I'm guessing the folks who do the Genital Herpes commercials don't actually have Herpes, but who gives a sh*t anyway right! I think she gets the point across weather or not she rides. Who cares.

"I'm guessing the folks who do the Genital Herpes commercials don't actually have Herpes" LMAO!

Mr. M and Webster... just checking! LOL! The herpes line made me shoot coffee through my nose this morning. Thanks guys!

Oh BTW... now that I'm up to speed with you guys on SOA, where's your review post?

The herpes was pretty darn good. Yes it was. Glad I was not having coffee.