Tech tip #3. A way to save your custom paint job or stock paint job, and save your motorcycle parts.

I've run into a custom painting opportunity a time or two, due to a crash, scratch, or likewise on a motorcycle part, or even a wave runner that was crashed into a dock.
.
When a painted part cannot be masked off easily, or needs complete dissassembly, it can get costly to do a paint repair no matter how small the repair area needed is. Likewise when you have a painted part from let say, Harley Davidson that is damaged, Most shops (Harley Dealers) consider the damaged part to be disposable because they won't sell their paint to you, so you can't have your local body shop fix it. This guarantees them big bucks in sales of more parts. However, you can take your painted part into a paint store such as a Sherwin Williams Automotive Paint store and have them read the paint with a special paint scope. They can then spit out a paint formula that will be right on the money, or at least close enough to blend in most cases. But most of the time this still involves full dissasembly of a part off of the motorcycle, or what ever it is you are painting, which can be expensive.
Furthermore, in the automotive paint industry as a painter, the rule of thumb is mix paint close enough to blend because you will never get an "exact match". This could mean painting all of your motorcycle parts to match, unless it is a "very" close color match. This would be spendy for a scratch right?
.
There is a way around this in many cases.
.
I'll get to that in a bit.
.
When you have custom paint, there is also a way you can many times save your custom paint job by adding to it.
.
A classic example is:
I have a friend whose chopper's rear fender was a bit too close to the rear tire. After the tire swelled when it heated up It rubbed and burned the paint edge on the rear fender tip. It has since been adjusted to no longer rub. Unfortunately this ruined a very expensive custom paint job that he has on the bike, if not for a solution I've used in the past.
.
If you can keep the repair area as small as possible and do something custom in the repaired area only, you have a chance at saving it. It can be clear coated if needed, but if small enough can be done with sign painter's paint called "One Shot"and or outlined with a "One Shot" pinstripe.
.
Example below: 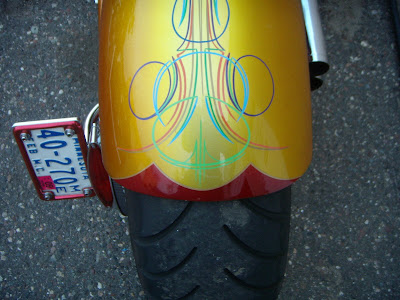 (I am not claiming this paint job, as this is not one of mine, but this was a classic example of how this can be done.) I know he has even got compliments on the rear fender accent that was never meant to be. Who knew( untill now)?!
.


Remember that wave runner I mentioned at the beginning of the post that was crashed? 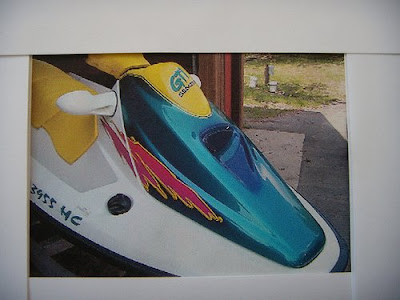 The hood got a crack. I did a fiberglass repair, primer, etc., the works, and then had to paint it. I could not match the white gelcoat that the hood had from the factory, but always have paint left over's from previous jobs, and took the colors that were already on the wave runner and gave the hood a custom paint job. Now not only did I save money, and time, I actually made the waver runner custom. This was wave runner #3 that I've done similar things to. You can even do this technique where there are no good break lines by having the clear coat edge broken off by pintriping over it like in the motorcycle example above.
.
Just some ideas for you to think about, and realize that there are options for you when you get that dreaded scratch, or dent.
.
This is a great excuse to go for it and get that custom paint job you've been wanting, and now have a reason to do it.
.
Mr. Motorcycle
Posted by Mr. Motorcycle at 6:00 AM

This is great advice. I know a guy who had a crab apple (of all things) fall from a tree in his own yard and dent the tank of his then brand new Harley. Nobody wanted to fix this tiny ding - everyone kept telling him he had to buy a whole new tank. He eventually found someone who fixed it, but it was a pain in the ass, and all over a teeny little ding!

You are right though, on my bike, they replaced every part damaged in the accident. They didn't fix a single thing. All brand new. I'm not complaining; in that respect I think I made out. But as you say, a simple little ding or scratch can be a big headache.

As for your bike, I agree with replacing the tins. They were brand new. But it is not always applicable, or necesary in all cases.

I hope this post can be of use to many bikers in the future. I think it is a sham to have to replace a part for a paint chip or scratch.

I feel it is important to mention as well, that I started posting these Tech. tips because I think they make good reading, and want to help my brotherhood of friends who ride. I don't care if I make a dime off of any advise I give, and don't intend to pick up any work by doing it either. The side jobs come anyway. I Just want to help out where I can.