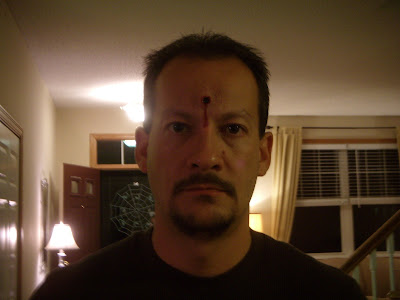 The kids in their little costumes were cute.

We did go through a craptacular amount of candy, and could have gone through more, had we not shut off the lights early on the non-costumed teenagers. Hell, even I went as far as making attempt to get into the Halloween spirit buy shooting a bullet between my eyes. I wasn't even trick or treating.

The Eve started out well, but earlier and earlier each year we see rows of cars with mothers and fathers bringing kids into our neighborhoods. We KNOW they don't live here. Where do they come from?

This year brought a new erea of non-Halloween spirited folks to our door.

We had a minivan with about 7 kids (little ones even) "escorted by parents" come up to the door from who knows where, AND NOT ONE OF THEM HAD A COSTUME. WTF?

Now I hope no one takes offense. Well if you do, too bad.
I am half Korean. I was adopted when I was only 22 months old. I remember nothing of Korea. I know little to nothing of my birth parents, nor do I care. As far as I'm concerned, My adoptive parents may as well be my birth parents.

Anyway back to my point. Being half Asian, you will know this view of mine is hopefully not going to come across as racist against Asians. If you think I am prejudiced, Well than I'll have to reply that I hate everyone equally.

Again back to my point. This was one of several minivans of parents, and Asian children
with no costumes. Are they new to the country? Do they not grasp the concept of trick or treating fully? WTF?
Posted by Mr. Motorcycle at 6:00 AM

I think they come from like were I live. I live in the country. Houses are far apart and it is dark on a road that jerks speed. They come to safe areas. I'm not sure.

I was going to say at first that maybe they were poor and couldn't afford costumes. But then I remembered of when my kids were little and we were so poor that sometimes I had to borrow change from their piggy-banks to buy milk. Even then, I still found some way to get them costumes for Halloween.

I would guess that they either don't grasp the concept yet (and after seeing everyone else this year they should be good for next year) or they're just trashy crap parents.

We drove to a nice neighborhood for "Trick-or-Treating". Our neighborhood isn't really suitable for walking around at night, so yes we piled into a minivan with some friends and drove to the neighborhood with the biggest houses. But at least our kids were in costumes! :)

My neighborhood is like that. What's popular here, is to pull a flat bed trailer with a pick up, and load it up with folding chairs and hay bales. The parents can ride on the trailer while the kids run from door to door like crazy freaks! It's seems like a good idea when families like to trick or treat together.

Loved your bullet hole! I bet that scared a few little ones, heh?

I want to thank those of you who chimed in on this one. I now have a new perspective. I must give benefit of the doubt that some are coming from poorer neighborhoods, unsafe neighborhoods, or just plain country back roads with little to no houses.

However, I have a hard time with the fact that if you can afford gas to drive your kids around in to trick or treat, you can't even afford a cheap homemade costume or makeup of some sort? My bullet hole probably cost me a nickel.

I spent 13 months in Korea in the mid 70's. I do not recall any type of Holloween anything there.

I remember that as a kid my neighborhood we did trick-or-treating on some other random day (like a day or two before Halloween), that way it cut down on the people from surrounding neighborhoods dropping in uninvited. If they came by on Halloween itself, then no one was handing out any candy. The little ones (who the whole thing is for) don't have a clue that it isn't really Halloween! If they are big enough to know better (or care), then they're too big to be going out anyway. IDK...it was an interesting plan.

When you come to the States, learn to speak the language, and learn to become part of it. Just don't do it half assed. However, I gotta give a little credit for trying.