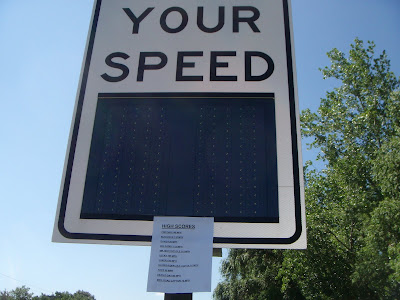 Thanks to those of you participated in my scientific study from the "How Fast Did You Say?" post on thursday July 24th!
http://01mrmotorcycle.blogspot.com/2008/07/how-fast-did-you-say.html

When I get something with a 6th gear, we'll have to re-do this survey.

That is awesome! It would be great to get everyone together for a picture with the sign! :)

Lol, Whoo hooo! I almost won something! Too bad the crotch rocket guys are sitting around scratching their heads going "Is that it?"

I trust you left that paper on the sign when you left? Funny brother.

But I'm with Joker...now that I have a 6th gear and a bike that won't go airborne if I push it, can I get a do-over?

Proud as hell to be on the roster!
And a respectable standing.
Howexer I don't think I'll be repeating the night that got me on the list.
But..........AZ does have a lot of long straightaways........

Thanks, but I can't take all of the credit here on this one. Can't remember where, but I saw a sign like it, and wanted to do one myself with people I knew.

Thanks, and yes, It would be great to get everyone together for a picture with the sign, or just together period.

LOL about the crotch rocket guys sitting around scratching their heads going "Is that it?". YOU KNOW IT"S TRUE TOO!
I'm guessing knowing Cristian, the record holder, it was on a rocket. And I'm supprised Rick Slark didn't jump in on this one?!?
Re: leaving it on the sign.. You bet I did!

You made the list. That's all that matters. It was simply a participant list. If I would have recd. 50, I would have put 50 on it. As far as not being much of a speed demon, That's just meants you have your head on straight, unlike SOME of the rest of us! LOL!
Re: "I'm with Joker...now that I have a 6th gear and a bike that won't go airborne if I push it, can I get a do-over?"

Proud as hell to have you on the roster, and a respectable standing.

I remember now where I found the idea that sparked doing my own sign.

It was posted from Mike Werner at Bikes in the Fast lane.