Harley is hitting the market hard aiming sales at youth with a new generation of motorcycle.

Harley is looking to bring fast, sleek and clean lines to the younger generation in attempts to keep up with the competition.

They call it the HDSCR. (Harley Davidson Super Crotch Rocket)
. 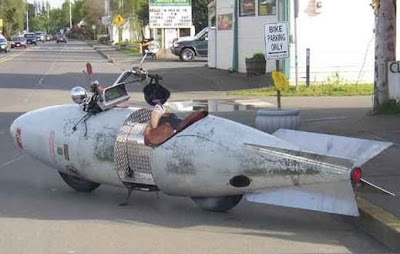 This is a parody. The above is not to be taken seriously.
Posted by Mr. Motorcycle at 7:41 AM

Too funny! A good laugh on a Monday morning is good for the soul. Thanks.

You know what would be cool? If it could ride on the street, fly, and operate in the water, I would definately get me one....but alas I don't think I'll be alive in 20010.

It looks like that Enterprise on Road Capt's blog. Al Queda version of the Harley.

Now, do you think cagers would dare even tap this bike with a bumper?

Very nice - hey, is that a Corbin seat??

I haven't seen anything like that since Slim Pickens rode the H-Bomb in Dr. Strangelove! Yeee Hawwww!

I know I need help....
I would ride that thing.
It would be cool as hell to return back east and see the look on my familys face riding that into town.

Big D would ride it because it resembles his Triumph as it is now! :)